Do you have questions about Western grid integration and how our proposal will power California’s growing economy with cheaper, cleaner, more reliable electricity? This FAQ is for you.

How can the California Legislature help to integrate the Western grid?

Legislative action is needed in California to allow the California Independent System Operator (CAISO), to become a regional Western grid operator. As noted in a recent letter from prominent clean energy advocates and associations to Governor Jerry Brown, Speaker Rendon and Senate President Pro Tempore de León, “we need to continue the process toward legislative authorization of a transition to a fully independent board for an independent grid operator that all western utilities and generators will have the opportunity to join.” Assemblymember Chris Holden, Chair of the Assembly Committee on Energy and Utilities, has introduced AB 813, which could accomplish these goals. The Natural Resources Defense Council has also proposed a detailed outline of elements that should be included in any legislation aimed at integrating the Western grid.

A fully integrated Western grid will drive down energy costs through increased coordination and efficiency of our electricity marketplace. A recent study estimates that this will reduce energy costs for California households and businesses by over $1 billion annually by 2030 — that’s billions of dollars over the next few decades. Lower energy bills mean more money in the pockets of working families and for small businesses to create new jobs and grow our economy.

How will Western grid integration help to fight climate change?

Integrating our Western energy grid will speed up our transition away from dirty fossil fuels by making renewable energy sources more cost-competitive. An integrated grid will create a bigger and more transparent marketplace, ensuring that costly coal and gas-fired power plants compete fairly with their cleaner counterparts. The winners in such a competition are the plants with the lowest operating costs — and of course, the “fuel” for wind and solar units is free.

Currently, California sometimes produces more clean energy from renewable resources than the inflexible fossil fuel plants on our grid can handle — forcing renewable energy plants to be shut off. An integrated Western grid is an important step toward ensuring we maximize the use of our renewable energy production, by allowing clean energy to reach a much broader market.  Grid integration will also grow our clean tech sector by allowing in-state wind and solar plants to operate at full capacity, so we don’t have to waste clean energy every time supply exceeds demand.

How will integrating our Western grid create good-paying jobs?

California faces the unacceptable prospect of throwing away significant amounts of clean, affordable energy because we sometimes produce more than our fragmented grid can handle. An integrated Western grid will expand the clean energy marketplace and increase demand for California’s wind and solar power creating an incentive for our clean-tech sector to grow and create new clean energy jobs.

Yes. California has committed to ambitious clean energy targets to help combat climate change, and the Legislature is currently considering a target of 100% renewable energy by 2045. Integrating the Western grid is an important component of meeting these goals and keeping our clean energy promise. California already gets over 22% of our power from wind, solar and geothermal sources, and we can do even better if we fully integrate our Western grid.

A state study found that integrated Western grid operations would not only comply with Senate Bill 350, it could reduce carbon dioxide emissions by 10 to 11 million metric tons of per year across the West, by 2030.

Will air quality improve or get worse?

Enhanced grid integration is likely to improve local air quality and reduce emissions of toxic air contaminants and criteria pollutants at the same time as it reduces carbon pollution across the West. This is because solar and wind are always the preferred sources of energy for utilities because they cost less to operate than power plants running on dirty fossil fuels like coal, oil, and gas.  With a fully integrated Western grid, California will be able to reduce curtailment of its own renewable resources during periods of their highest potential production, while importing clean, cheap energy from other Western states when local renewable energy production is insufficient. Without enhanced grid integration, we too often have to fire up natural gas plants in California that are expensive and inefficient to keep in operation for the sole purpose of meeting local “peak demand.”  Natural gas power plants with emissions that disproportionately harm disadvantaged communities will have fewer startups, shutdowns and “spinning,” with an more fully integrated regional grid.  California will use less dirty fossil fuel energy, not more.

California has adopted energy policies that favor clean energy from renewable sources over fossil fuel power. Integrating our Western grid can be designed to protect these policies, and will help clean energy sources like wind and solar farms continue to grow, helping to phase out dirtier sources while reducing costs and improving reliability for electricity users across the West.

Renewable sources like solar and wind energy cost less to operate than fossil fuel plants like coal, oil, and gas, so whenever there is demand anywhere on the grid, they are always the preferred sources of energy for utilities. And when there are interruptions to clean energy generation in California, an integrated grid can more efficiently dispatch cheap emissions-free energy from another state where the sun is shining or the wind is blowing.

Does integrating our Western grid threaten California’s sovereignty or control over our state’s clean energy policies?

No, if we take steps to ensure the sovereignty of all states involved. Grid operators do not set state energy policy and have a long history of respecting it within other existing multi-state systems. With the right framework in place, all Western states will retain oversight and authority over their own respective energy policies and utilities.

Could other states interfere by out-voting California on the grid operator’s governing board?

The independent Western grid operator could be overseen by a fully independent, diverse board of experts, with no political appointees to limit conflicts of interest. This is the practice of every other major multi-state grid operator in the United States.

Will disadvantaged communities and environmental justice advocates have input on the governance of a Western regional grid operator?

Yes. The critical first step is for the California legislature to authorize the CAISO board to oversee a transition to a fully independent board. That would occur in consultation with stakeholders across the West, including environmental justice and other public interest representatives, state regulators, utilities, consumer advocates, and labor leaders. The governing board should be comprised of independent, diverse experts, with no political appointees.  All stakeholders, including disadvantaged community representatives, should be consulted about the governing board’s transition and membership.

As with all regional transmission organizations, open meetings and participation opportunities for community stakeholders will be important. Additional governance structures, such as a diverse stakeholder advisory board, would be helpful to the new CAISO board in addressing matters that require consensus and consistency across the West.

Will the reliability of our electricity service improve under enhanced grid integration?

Yes. According to an op-ed by Dr. James Sweeney, a Stanford professor and author of The California Electricity Crisis, “The existence of so many separate operators leads to severe challenges in coordinating real-time operation and scheduling. This fragmentation is the result of haphazard evolution over many decades, rather than rational choice. Western grid fragmentation raises costs, degrades reliability and increasingly impedes the spread of inexpensive renewable energy resources.”

Are there other examples of integrated regional grids in this country? Have they been successful?

Yes. Most of the electricity in the country is managed within regional grids. Integrated regional grids including PJM and MISO (see map) have been successful at reducing energy costs for households and businesses and contributing to the national trend toward greater energy efficiency and cleaner renewable energy resources. 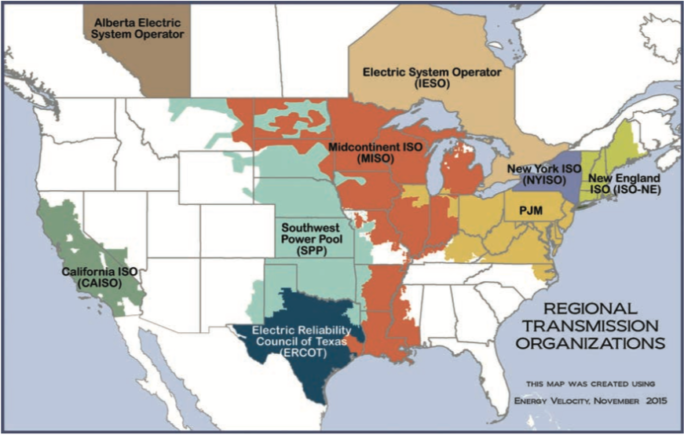