NRDC, Vote Solar, a former Colorado Commissioner and others make the case for a regional transmission grid.

We have been hearing concerns that moving to a regional transmission operator to connect the Western U.S. somehow harms the prospects for greater development of distributed energy resources, especially local solar and storage, and could lead to an increase in the use of fossil fuels elsewhere in the region. A careful analysis of the facts shows these concerns are unfounded and that in fact, the opposite is true. A regional grid operator will be beneficial for renewable energy development, including distributed generation, for multiple reasons.

Replacing a highly balkanized and inefficient group of grid operators (see the WECC balancing area map below), many of which rely on outdated and highly polluting power plants, with a fully coordinated regional system operator will make better use of the existing interconnected grid, more efficiently share electricity reserves allowing for the accelerated retirement of unneeded facilities, and give more value to cleaner, renewable power sources.

A regional grid operator makes managing each renewable energy generator’s variable output easier to coordinate and creates more value that can be shared by utility customers and renewable energy developers. It does this by blending renewable power from across the West, including the output from many smaller customer-owned or community-based systems located on dispersed distribution systems. This widespread diversity of resources can be used to meet energy demand at times when fossil fuel generators that are part of local systems would otherwise have to be switched on to fill in the gap.

Solar energy ramps up and down in a quite predictable manner, but varies by longitude and latitude. The availability of other renewable resources can now be forecast with ever-increasing accuracy. A regional grid operator can use renewable power resources across a much wider geography that experiences different weather patterns and energy loads to better meet both systemwide and local needs. This wider area coordination can reduce not only greenhouse gas emissions but also local air pollutants that harm public health, particularly for the most vulnerable.

Better forecasting and scheduling of resources will allow the transmission network, in which we have invested billions of dollars, to be used much more efficiently. Less transmission capacity will sit idle and more pathways will be opened up to deliver power to areas when it is most needed. This more efficient use of existing transmission assets will prevent the unneeded transmission construction that would otherwise occur in a balkanized system.

In its recently released Transmission Plan, the California Independent System Operator approved a strategy that leverages a substation upgrade, battery energy storage, energy efficiency measures, and distributed generation to retire 165 megawatts of older, high-polluting natural-gas generators located in a low-income community in Oakland, Calif. This type of innovative, forward-looking planning that incorporates “non-wires solutions” can be replicated across the West through coordinated transmission and individual state-directed efforts. 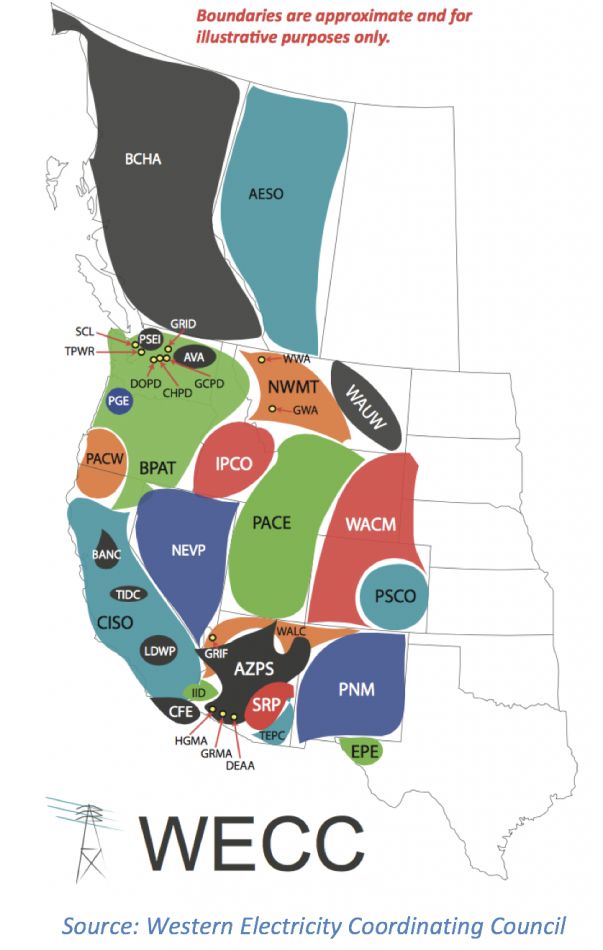 Distributed energy resources can provide an array of electrical system benefits. By having access to wholesale markets, distributed solar, energy storage and other local resources can capture value that is unavailable in areas without liquid power markets. Managing and better coordinating power flows at the transmission and distribution interface (substations where the wholesale and retail electrical systems intersect) will allow these resources to reduce the wear and tear on both the transmission and distribution systems, and defer costly grid upgrades (the distribution system is about four times costlier than the transmission system for the delivery of a kilowatt-hour of electricity to customers).

A regional grid can even help assure that the rapidly expanding fleet of electric vehicles is powered by low-cost renewable generation. By accessing regional solar, wind and storage resources (some storage can be provided by the EVs themselves), and compensating them through the market, a regional grid helps ensure that the growing fleet of EVs will be clean, helping realize the EV promise of lower amounts of greenhouse gases and conventional pollution.

A regional grid with a coordinated market will be a cleaner grid. Solar and wind generation are by far the lowest-cost power plants to operate and will be more widely utilized in a region-wide electricity market. While California has a robust and liquid wholesale electricity market, many other parts of the Western grid are operated according to individual utility priorities. This balkanized setup does not result in the lowest-cost energy being used in each and every hour.

A regional grid operator, independently managing day-ahead and real-time energy markets, will put economic pressure on inefficient and dirtier fossil generation units that cost more to operate. Renewable energy has no fuel cost and very low operation and maintenance costs compared with fossil-fueled competitors. In a competitive market, renewable generation will be used before costlier and more polluting fossil generation.

In a regional system, more renewable energy will get developed, less will be turned off because of local imbalances, and customers everywhere will enjoy cleaner and cheaper power. Today, increasing amounts of renewable energy — mainly solar power — must be turned off (curtailed) when there is insufficient demand for it in a single balancing area.

A regional grid operator will create value for solar resources that now must be curtailed by making it available to customers in neighboring parts of the Western region. Instead of using costlier fossil generation, these customers will now have access to lower-cost clean power. The same holds true for wind generators constrained by small markets.

A regionally integrated grid and market is no threat to the evolution of DERs and instead is a powerful enabling force for the orderly and efficient integration of renewable energy and even new technologies providing system reliability services that make the electrical system cleaner, more reliable and resilient, and more cost-effective for all of us. It is time for regional policymakers to take this step together, for all our benefit.