Speaking from the same podium where California Lt. Gov. and 2018 gubernatorial candidate Gavin Newsom earlier this year pronounced the Western regional grid initiative “dead right now,” a senior attorney at the Natural Resources Defense Council, or NRDC, said the proposal to merge the California ISO with transmission operators across the West has a stronger pulse than many people realize and is more important than ever.

“I think we are at a moment where it has a chance to succeed in a relatively short period of time,” Ralph Cavanagh, co-director of NRDC’s energy program, told a luncheon of the Northern California Power Association last week in downtown San Francisco. Citing “increasingly undeniable” economic, reliability and environmental benefits, including the prospect of a West-wide grid able to absorb California’s growing glut of solar power, NRDC is one of nearly two-dozen organizations and high-profile energy experts calling for the state’s legislature to pass a bill enabling “an evolution toward a fully integrated western power grid,” Cavanagh said, building on the success of the ISO’s regional real-time market. 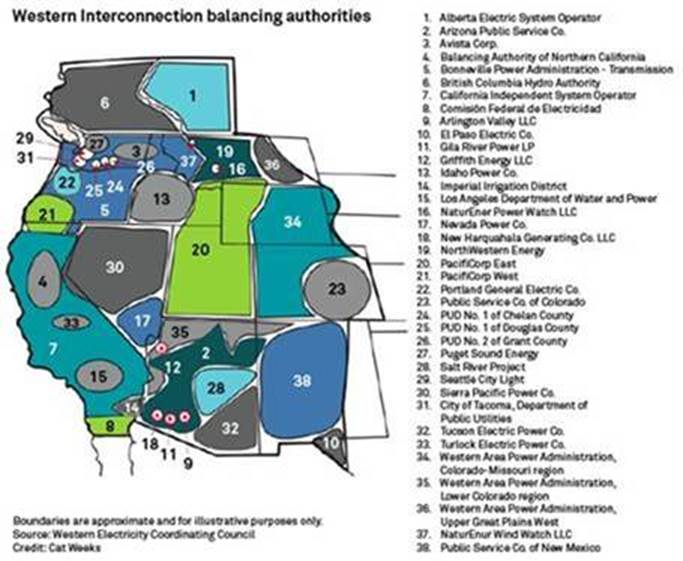 The critical first step toward consolidating what Cavanagh and other proponents have labeled the 38 “balkanized” balancing authorities of the Western Electricity Coordinating Council, beginning with the combination of the California ISO and transmission assets  of Berkshire Hathaway Energy subsidiary

PacifiCorp, is to convince reluctant state lawmakers to consent to transforming the ISO’s governing board into a politically independent body, rather than one appointed by the California governor and approved by the state Senate.

“The rest of the West is not willing to engage more fully until we change governance,” Cavanagh said at the Aug. 2 event. “To some of you it may look like we’ve made very little progress,” he conceded, noting the conversation over a potential tie-up of western balancing authorities started more than two years ago when PacifiCorp offered to join the ISO. “But I want to report that we are closer to having an agreement between the governor and Legislature than many people realize.”

Based on the “overwhelming case” for a fully integrated western grid and backing from Gov. Jerry Brown, Cavanagh believes a deal can be struck as early as this summer recess and packaged into a moving piece of legislation once lawmakers reconvene Aug. 21. That’s enough time for Brown and lawmakers to iron out key sticking points, the NRDC attorney asserted, pointing to the breakneck tempo at which Brown brokered a deal to win a bipartisan, two-thirds majority vote last month  to extend the state’s cap-and-trade program, which “dwarfs this one in complexity and difficulty,” he argued.

Many state legislative leaders; public utilities; and some environmental, consumer and labor groups have voiced concern over perceived negative impacts on California’s renewable energy and climate policies, and the state’ sovereignty over energy matters, while questioning the estimated $1 billion to $1.5 billion in annual economic benefits touted by proponents.

“My contention to all of you is [these arguments] now have been fully rebutted,” Cavanagh said. “On the whole question of state sovereignty, the most important thing to understand … is that nothing will change in terms of scope of federal regulatory authority over the ISO now versus a fully integrated western grid,” he added, because the state’s grid operator already is regulated by the Federal Energy Regulatory Commission. Fears that a West-wide grid could be a Trojan Horse to ‘sneak more coal into California’ are also unfounded, the NRDC energy program co-director said, because the short-term operating cost advantage of wind and solar power versus coal are driving a cleaner system. “And nothing could plausibly change that.”

A recent study by a clinic of Yale Law School and Yale School of Forestry and Environmental Studies cited the U.S. Constitution’s supremacy and commerce clauses as “theoretical threats to California’s clean energy laws,” which could be preempted if they were found to be in conflict with the Federal Power Act, the Public Utility Regulatory Policies Act or other federal laws. But Yale’s analysis found that the expansion of the ISO into a regional system operator “would not make these challenges any more likely to succeed.” It concluded, “Shifting to a regional grid operator would enable more efficient, affordable, and reliable integration of renewable resources without increasing the legal risk to California’s clean energy policies.”

While Cavanagh called the report “as forceful an affirmation of western grid integration as you will ever hope to see,” he cautioned over the consequences of inaction. “If we do not begin with the venture, look for others to take advantage of the missed opportunity. And look immediately for a venture headquartered in Little Rock, Arkansas … the Southwest Power Pool … they are moving to take advantage.”

The Mountain West Transmission Group, which includes several members within the Western Electricity Coordinating Council, currently is considering joining the Southwest Power Pool. “The question for Californians right now is: Would we prefer that kind of incremental shift, with that leadership, or would we prefer it to come from the ISO?”